Your Purpose...
What are you trying to achieve through your website?

How much will your website cost? Use our budget calculator to calculate an estimate of how much your website will cost. Follow the prompts below and complete all sections. Your Purpose... What are you trying to achieve through your website?

Not getting enough leads? A well designed website can help your business achieve more leads through the use of excellent usability strategies.

Want to sell your products and services online? Having an effective and optimised shopping cart system can make all the difference!

Your website will need to be uploaded on the web. We offer reliable web hosting with support.

Content/Copy of a website can break or make the success of a website. Choose your words carefully!

Having social media accounts will give you the platform to talk with your customers.

Your Budget...
Please find your estimated budget below. This is a rough estimation of how much you will need to build your website.

Your Details... Please find your estimated budget below. This is a rough estimation of how much you will need to build your website.

Complete the form below. We look forward to the opportunity of working with you.

The final season of Game of Thrones has ended. Social media, blogs and articles are having a field day, using the last months (years) global obsession to attract online visitors and cultivate the lucrative fruits of the final season. While the author of this massive tale is solely responsible for the origins of a similarly massive TV show, we can’t ignore the fact that GoT marketeers had their own significant role to play. Whether viewers loved the finale or hated it, they have voiced their opinions on every page and platform dedicated to this blockbuster ride through the isle of Westeros with absolute gusto.

Viral. Global. One hundred and seventy countries aired the final episode. Is this show’s success due solely to good storytelling skills? No. Game of Thrones fanaticism is also the result of pure marketing perfection.

Game of Thrones – advertising to millions

From a Starbucks cup ‘accidently’ left on a Winterfell table (Starbucks gained an estimated $2.3 billion in free advertising from that faux pas) to a 495% social boost after Ikea’s Game of Thrones advertising-break spot, it wasn’t only Bran that came out on top (by now, this shouldn’t be a spoiler).

Thanks to a hefty mix of on- and offline marketing campaigns, HBO made sure that the public were kept interested, not only between shows but between seasons. Due to these strategies, viewer numbers rose, resulting in probably the highest engagement levels on television to date. Around 2.51 million viewers tuned in to the first airing of the first episode of season one. By season seven, this number had risen to 10.11 million (not counting later viewings, just the original air night). On average, 5 million Tweets went out during the show. Season eight, episode six (the finale) had nearly 18 million of the world’s population glued to the screen. These figures don’t include the illegal downloads and streams that millions more took advantage of. These statistics also don’t include reruns. It is estimated that over 100 million viewers have watched all eight seasons of Game of Thrones. To put this into perspective, just over 4 million Australians tuned into the 2003 Rugby World Cup Final. But it can’t compete with the 3 billion global viewers watching at least part of the 2018 soccer World Cup.

Game of Thrones made good use of the right campaign at the right time. A tip that also does well in the marketing world. In order to increase interest in the last season, HBO set up a treasure hunt, sending fans around the world to search for six replica Iron Thrones. Adventurers received clues via social media, turning this campaign into the biggest ever hunt for treasure from the comfort of an armchair. The budget? Very little indeed.

How does this translate into your marketing strategy? When listing your goals, don’t expect to achieve them all at once. Instead, find the right opportunity to get the right result using milestones and smaller goals. Similarly, feeding small pieces of information a bit at a time increases the appetite for the full package. ‘Always leave them wanting more’ definitely relates to the fantastical, medieval-like world of the Seven Kingdoms, as well as the smallest startup. Give relevant information at the right time to increase interest and create engagement. Get your signups to anticipate and look forward to your next communication. Never give everything away at once. If you are patient, take advantage of every opportunity that comes up, and use the right tools you will cross off every entry on your company list of goals, go global and discover fresh markets. Just like Arya. 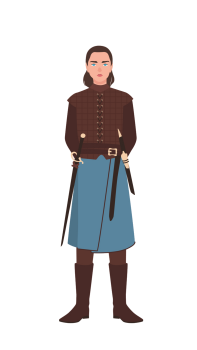 Going solo means more work for less recognition. By working strategically with a partner, you lighten the load and double the outreach. HBO recognised this early on, sharing its popularity with Budweiser, White walker whisky, the Xbox, Adidas running shoes and many others willing to pay the price. The result? Viral advertising, thanks to the world’s obsession.

Co-branding in high-quality products is the equivalent of the Tyrion and Bronn relationship. People look forward to it. Anticipate it. Want to see more of it. Faithful followers of one brand will accept the other and vice versa. Everyone wins. The fans get great content, products or experiences, the brands get new leads and higher sales or signups.

Social media and news channels have taken delight in reporting viewers’ discontent as the television version of Game of Thrones unfolded. Throughout the series, adjustments were made that didn’t match the story written by G.R.R. Martin, causing irritation, confusion and fury for those that had read the books. The directors and screenwriters began creating a different tale, leaving out seemingly important happenings and characters (Azor Ahai wasn’t reborn, there’s no Jeyne Poole, they forgot two of Sam’s sisters … true book fans will be simultaneously nodding and frowning).

Why? The series makers have stated very clearly that they have added to character roles according to viewer popularity. While this alienates the purists, it takes advantage of wider public opinion. And for both groups, the argument of what has been done well and what has not gives yet another opportunity to discuss the show on every channel available.

To implement GoT marketing into your enterprise, think ahead and be prepared to change direction according to your public. Or are you offering a product for purists? In which case, stick as closely as possible to the original and choose quality over quantity. Want to please the largest group? Take note of what they prefer and mould your service or product to the needs of the majority.

Knowing what is going on around you can make you both unique and a leader. People will turn to you for advice, while studying the competition means you have the knowledge to make your campaigns even better. Without insights into your target market, without being sure of their next moves, you throw away an opportunity to profit from increased engagement and a higher ROI. If you offer content, know your subject and offer expert, well researched help. Even if ill equipped to carry out every task within your business, knowing your market and putting feelers out for your competition means you won’t waste your budget on supplying a service nobody wants. Hire a professional to take care of the things you can’t. While you concentrate on your own strengths, a good marketing professional, design giant or analysis expert can be your Hodor.

In conclusion, whether for written-word purists or a TV addicts, this series has kept the world on the edge of its seat since April 17, 2011. Two days later, Fidel Castro resigned. Two weeks later, the Duke and Duchess of Cambridge, Prince William and Catherine [Kate] Middleton got married. While the details of these two historic events have been lost to the majority, millions still remember and talk about a scrawny young lad being pushed out of a tower window. Now that’s engagement.

How much will you need to
build your website?
REQUEST A QUOTE